Lounging with Holdan at MPTS 2022

After an absence of 3 years, the Media Production & Technology show (MPTS) was back with a bang as over 8,000 people literally queued around the block for the 2-day event at London Olympia. Holdan showcased the latest technology with a striking Tech Lounge, a mocktail bar envisioned and created by our own Graphic Designer Jo Mohan, working alongside Design Consultant Martha Camarillo. 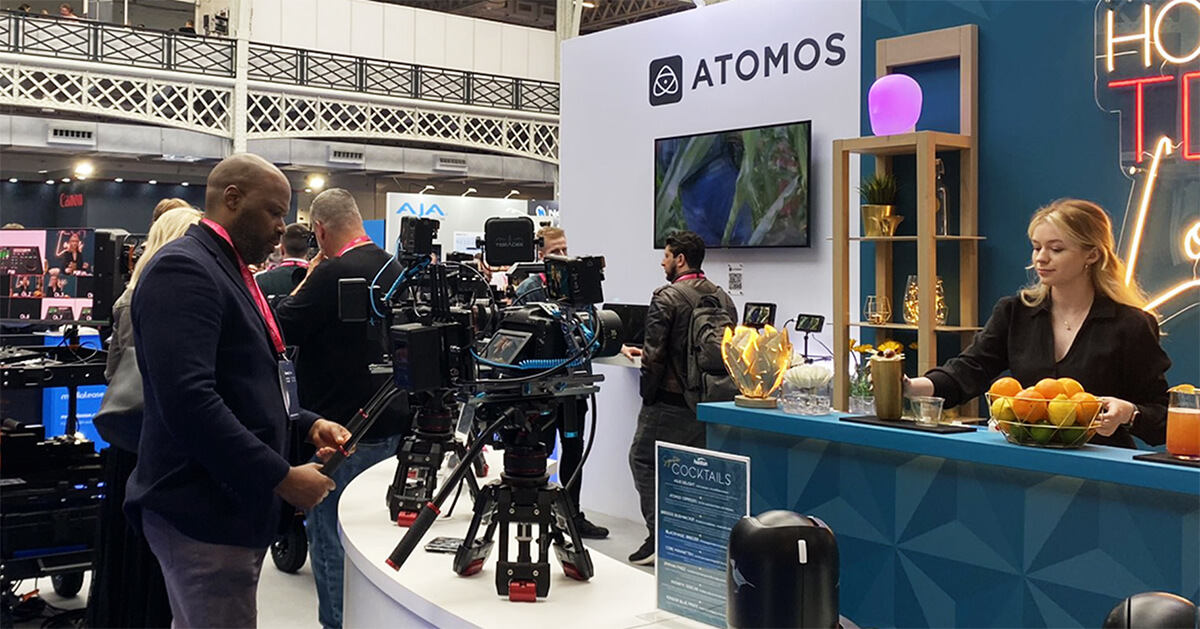 Having such a visually appealing centrepiece was essential to showcase some of our leading production technology brands, but just as much attention was paid to building a truly working booth. Over 100m of Ethernet cable was laid under the floor to create a ‘World of NDI’ connecting PTZ cameras, controllers, recorders, streaming devices and display monitors from BirdDog, ASUS, Sharp/NEC, Epiphan and SKAARHOJ.

The other side of the booth was mainly SDI/HDMI-based and featured a range of cameras and streaming devices tricked out with the latest and greatest from Atomos, Samyang/XEEN, Core SWX and Kondor Blue.

Trade shows really give people the chance to get hands-on with equipment, something that webinars and online presentations simply cannot replicate. said Kriss Hampton-Joyce, Head of Technical Product Management, who designed the booth workflow.
We really wanted to pack as much working product into the booth as possible to provide the best possible visitor experience.

BIRDDOG FLYING IN THE UK

BirdDog’s CJ Farrell flew in from Texas to support us at the show to talk about all the NAB announcements, including the P110/P120 cameras. A P120 was featured on the booth – the first time it had been shown in the UK. CJ also explained how BirdDog’s new ‘Silicon 2’ firmware update brings new functionality to the entire BirdDog PTZ range and gave an overview of BirdDog’s new cloud collaboration tools.

Another UK first was the first public showing of the BirdDog Intel® SDM module. Installed in a compatible screen, provided by Sharp/NEC, it enables content to be streamed directly to a display monitor over NDI.

The entire Atomos range – from SHINOBI to NEON – was on display. The NEON firmware has received a significant upgrade recently and with the new lower price point it’s a very affordable reference monitor for colour grading. Paul Scurrell, Senior VP of Product for Atomos, explained how Atomos CONNECT – also launched at NAB to rave reviews – will be a gamechanger for camera-to-cloud workflows and global collaboration.

Featured on the camera bench were:

A BirdDog A200 Gen 2 weatherproof PTZ camera was mounted on the booth walls and a BirdDog PF120 block camera. Both were connected to the NDI network.

As usual, we made extensive use of INOVATIV carts: Voyager 36, Apollo 40 and Echo 36. Not only did they showcase real-world application workflows, but they also provided flexibility in terms of being able to better manage booth traffic.

INOVATIV has a very extensive ecosystem of accessories for the carts, from additional shelving and quick release monitoring mounts to drink holders for somewhere to put that all-important coffee – that’s a must for any trade show!

We tried to include as many INOVATIV accessories as possible to give visitors the chance to experience how the carts are configured and built, all of which can be done without any tools whatsoever.

Last, but not least, we had a Roland Professional AV live production workstation built around the V-600UHD 4K HDR multi-format video switcher and the P-20HD replay system.

It’s been a hectic couple of months, with the MPTS coming so quickly after the NAB Show and, just prior to that, BSC Expo. Trade shows are like buses it seems – nothing for ages and then three come along at once.

But the fact that these three events have been so well attended is a testament to the fact that nothing beats human interaction for learning about new production tools. Next up, it’s Kit Plus in Manchester on June 23rd – maybe see you there?