A vast digital canvas at the centre of Edinburgh Airport’s multi-million-pound redevelopment project is transforming the check-in hall by quickly and seamlessly delivering important information to travellers. This case study explores the logistics of installing an LED canvas and intuitive AV platforms in a busy transport hub.

A vast digital canvas at the centre of Edinburgh Airport’s multi-million-pound redevelopment project is transforming the check-in hall by quickly and seamlessly delivering important information to travellers. This case study explores the logistics of installing an LED canvas and intuitive AV platforms in a busy transport Europe's Largest LED Check-in Display

Traditional check-in desks at Edinburgh Airport have been replaced by an 85m visually striking self-check-in LED environment, ensuring wayfinding, flight information and marketing visuals are clearly visible from anywhere in the hall.

As part of a long-term expansion and modernisation plan, Edinburgh Airports Limited (EAL) has completed a multi-million-pound redevelopment of the check-in facility featuring a baggage carousel display spanning the full length of the hall enhanced by innovative self-service technology.

Completed in March 2020 in just over five weeks, the team behind the ambitious project endeavoured to integrate a flexible wayfinding and flight information display solution. From the outset, nuVIDEO worked with our Midwich team and PSCo (part of the Midwich Group) to ensure everything was in place to facilitate an installation that would be seen by millions of travellers.

“One of the critical considerations in the design of the new check-in facility was to ensure that flight information, wayfinding and emergency information systems would enable passengers to quickly and safely navigate their route through the check-in hall. This was particularly important given the introduction of multiple new self-service check in systems,” says Michael Macneil, sales manager nuVIDEO. 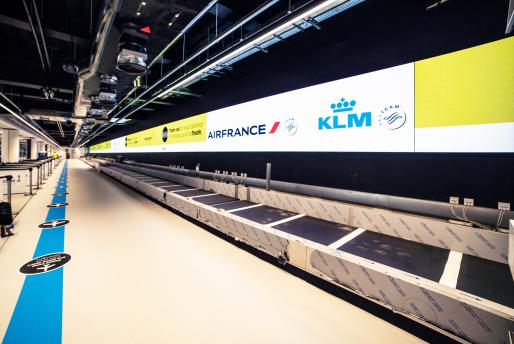 To outline EAL’s initial ideas regarding the type of solution required they created a CGI visualisation as a basis for further discussions. The concept this outlined utilised 59” by 65” landscape displays, fitted end-to-end, running the full length of the baggage carousel, with the displays positioned at a height where they would be clearly visible to all passengers in the hall.

“The initial brief was centred around LCD technology and direct PC input to each monitor. This would have been functional but it was clear LED would be a more suitable platform,” says Graham Pow, head of sales, PSCo.

Following an onsite meeting back in August 2019 to discuss and demonstrate the merits of LED to the project’s stakeholders, a mock-up was created at Innovation House - Midwich Group’s southern showroom in Bracknell - to show the client via video what the finished solution could look like.

“It was all about identifying the right technical tool and vendor technology for the project and using the in-house technical expertise at Innovation House to produce a digital signage and image processing solution to sit behind the LED wall,” says Manesh Mistry, high-end display and videowall processing sales specialist, Midwich.

“We then demonstrated the potential return on investment leveraging the flexibility of LED could achieve, using the space not only for wayfinding and flight information, but also for marketing - an avenue they had not considered,” adds Macneil.

Once LED had been selected as the solution for the digital canvas, nuVIDEO worked closely with the airport’s commercial team to examine how the asset could be dual purpose as an information focussed and promotional display as well as offering longevity and low maintenance.

The brief and initial design concepts developed from individual monitors to an 85m seamless LED canvas allowing more flexibility in how, when and where content was displayed and creating a wow factor for those entering the terminal. Outside of the initial brief the client also wanted scope for expansion and flexibility in the canvas’s future use. 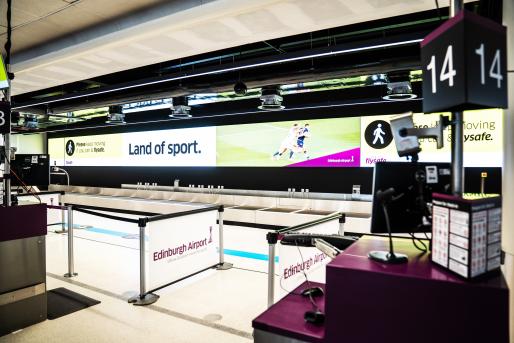 Occupying a position above the baggage carousel that offered limited ceiling height, the digital signage project demanded an LED panel which would be clearly visible from all areas of the check-in hall and could deliver striking visuals from a distance and as close as 2m. The team chose Absen’s A27 2.5mm LED panels from its Acclaim series, with prefabricated frames supplied by PSCo to mount the solution.

Deploying a videowall longer than a Boeing 787 Dreamliner in the check-in hall of a busy international airport was both logistically and physically demanding. Throughout the build, the work area was classed as airside, meaning every item had to be brought in manually via the airport security screening systems, while staff passed through security to access or leave the site. Due to the volume of hardware this stage of the installation was split into work phases and equipment was stored offsite until each phase started.

“The videowall was being mounted on to a preconstructed plywood wall, immediately above a baggage carousel which was being constructed and tested throughout the installation. This required meticulous planning and co-ordination with a number of other trades and contractors throughout,” says Macneil. “As the wall itself was over 85m it was almost impossible for the building contractor to keep it dead straight which presented considerable challenges when attempting to align every frame and LED panel.”

A total of 140 prefabricated frames were mounted onto the surface of the wall and aligned end to end, with each vertical frame consisting of four Absen cabinets, slotted into the frames and interconnected in a daisy chain fashion. The well-designed frame allowed ample XYZ adjustment to work with the tolerances found onsite. The canvas comprised 560 Absen A2725 Plus cabinets, amounting to 2,240 LED modules. Once aligned, each section of the wall was fully tested. 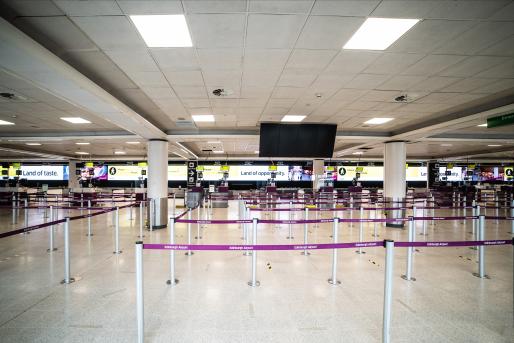 The project demanded a videowall processor with the capacity to accommodate 42 HDMI input and 18 output feeds. This was further complicated due to the location of the nearest suitable comms rooms in relation to the videowall.

“To ensure maximum cable lengths were kept to within a 100m range across the length of the wall, videowall processing was housed within three separate comms rooms. Processors were then linked to operate as a single system, enabling any source to be displayed at any position along the length of the wall while maintaining a seamless canvas,” says Macneil.

The processing conundrum was solved using three Datapath VSN1172 chassis with fibre link cards providing high-speed, low-latency interconnectivity. A primary chassis was located in the comms room central to the videowall and two secondary processors populated with an equal split of the video input and output cards were located at comms rooms at either end of the wall. The wall comprised 18 virtual sections using Novastar MCTRL660 Pro videowall controllers which offered three separate controllers located over 100m from each other and could work as one.

“Datapath’s VSN1172 chassis together with their expansion links cards allowed a single system to be used, meaning any source could be displayed at any position along the length of the wall to maintain a seamless and versatile long canvas. BrightSign’s XT244 players then deliver the airports bag drop and signage content to the LED displays, offering reliable, crisp Full HD and 4K content,” says Russell Taylor, key account manager, Midwich.

“The wall is more than 17 times the width of HD resolution and 18 million pixels. It’s an unusually wide canvas with a relatively low vertical resolution. The maximum that a windows-based controller can do is 32K pixels so this exceeded this.” 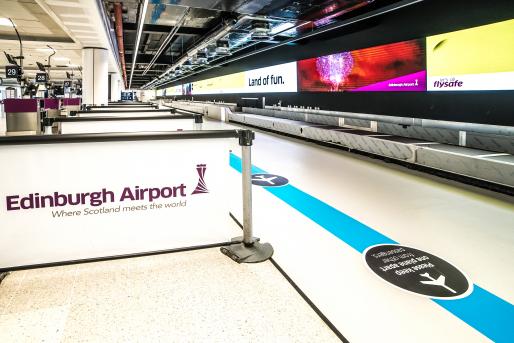 A critical use of innovation

The redevelopment project’s success lies in its ability to harness the power of technology to help achieve the airport’s vision of creating a multi-airline self-bag drop facility that enhances the airport experience for passengers by reducing bag drop times, informing customers of new check-in process and providing pertinent information regarding their journey.

This has been particularly crucial in enabling Edinburgh Airport to operate safely throughout the coronavirus pandemic, engaging with customers on a scale previously not possible, to deliver clear and concise information on new procedures and local restrictions.

In a busy and constantly changing environment such as an airport, using LED as a canvas for digital signage supported by reliable processing systems can be a powerful tool to engage travellers and deliver targeted and meaningful messaging.

Adam Wilson, operations director, EAL, agrees: “The installation creates a striking visual for all passengers entering the check-in hall. In practical terms, we can clearly display where certain flights and airlines are checking in and show key passenger communications such as security information. The flexibility of the wall means we can also use it for video to showcase destinations we fly to, Scotland or our retail offering.” 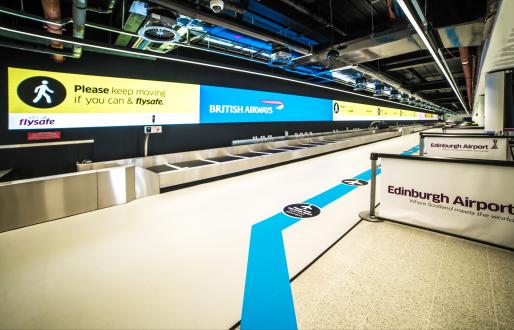